This past July 20th, 2018, celebrating the opening of the temporary exhibit “Marines”, we were able to enjoy a great afternoon thanks to the poetry recital by Núria Miramelsmots and Montse Morillo accompanied by Toni Plasantemans on the saxophone.

The artists dwelled into the poems of Hilda Hilst, letting poetry and eroticism flow through their voices, the harmony of the blues dazed with the increasingly darker tones of the sky, and by fits and starts they were giving us an opportunity to discover the series of Marines by Carles Amill.

For him, the sea was extraordinary, indescribable … Something, or somewhere, that could only be guarded by another noble art; poetry, that is why on Carles last exhibit, the Marines appeared accompanied by poems. Salvador Espriu, Paul Eluard and two more of his own poems dedicated to the sea, were the ones chosen to present its catalogue.

We also encountered:  “Mira’m”, a video recording presented at the exhibit under the same name in January 2003 at ArtLoft, Reus. In the film, Carles performed a live painting of one of his Marines on the bare back of model Ana Lucía Bravium with makeup. 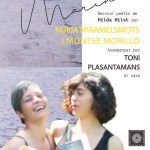 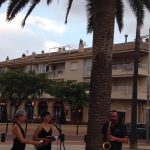 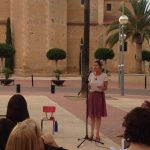 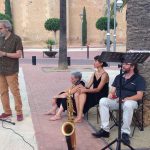 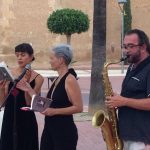 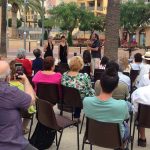