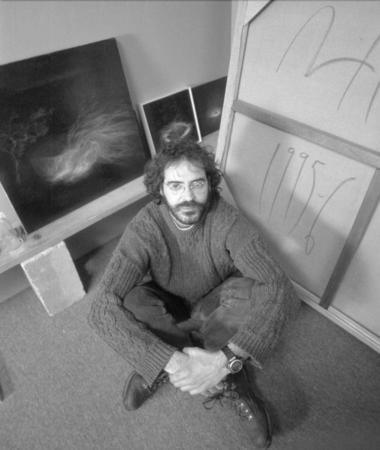 He completed high school in “la Salle” of Gracia (a neighborhood of Barcelona). He had a passion for painting and drawing , and his talent was immediately recognized.

After high school, Carles was drafted into the army— military service was compulsory at the time— and assigned to the Gracia military quarters. An officer discovered that Carles was an artist and commissioned him to paint equestrian military themes. In exchange. he gave Carles freedom from many normal army duties, so Carles spent his military service in the bars and cafés of Barcelona.

Carles registered at the Fine Arts School of Barcelona, where he got a Master’s degree in painting techniques.

During those years of training, he became acquainted with many renowned teachers and artists, including Dali, Pijoan, Tapies, Santos Torroella and others. He spent a summer in Venice doing an apprenticeship at Emilio Vedoba’s studio.

In September 1985, he took a one-year leave of absence from his teaching position and went to United States to be with Elena Padrell. His first exhibits in States were in Houston, Texas.

In spring 1986, Carles submitted a large canvas to the V Biennal Domecq in Mexico City and won second prize.

Carles moved back to Spain, taught for a while, exhibited several times, and then returned to the U.S., to New York, where Elena was completing her PhD in medical research.

From that time till 1992, Carles alternated his residence between Spain and New York City. Despite these moves he managed to participate in a number of exhibits in both places.

On December 1991, Carles and Elena were married at the City Hall in New York. In spring 1992, they held a wedding celebration in Spain, and in July of that year Carles resigned his teaching position in Reus.

In 1993, Carles and Elena moved to Seaford, Delaware. Carles participated in a course on painting conservation methods and the use of “Abeba” as a varnish cleaner. He also got a commission from Reus City Hall Division of Arts and Museums: they put him in charge of the research and historical documentation of a very valuable private collection of Catalan gothic art.

The exhibit drew good reviews from the local press. He became a recognized figure in the art circles of Delaware, and was occasionally asked to teach or to serve as a judge in art competitions. He was featured the first page of the magazine “Delaware today” as “one of the 50 hottest people in Delaware in 1995.” In 1995 he also exhibited in Easton, Maryland. He also participated in two shows in Manhattan,

In March 1998, Carles moved back to Spain. In Vinyols, a small village near Reus, he made his studio on the ground floor of a stone building in the middle of town. He worked as both conservationist and painter. He also had two solo exhibits, one in Reus and one in Barcelona, of the work he did in the U.S,

Reus City Hall sponsored an exhibition of a decade of work (from 1989 to 1999.) The exhibit was well received and accompanied by an extensive catalog. The text of the catalog was written by a Reus historian, Pere Anguera.

In October 30th 1999, Elena gave birth to their son Josep Amill
and the family moved to Castellvell.
.
In Christmas of 2003, Carles experienced deep depression and inexplicable exhaustion. In February 2004 after a terrible loss of weight, along with headaches and nausea, he was admitted at Hospital of San Joan in Reus, where he was diagnosed with a malignant brain tumor.